I decided to bite the bullet and get myself an actual server on the internets to host my thingamabobs, and here I write about my experience.

Like other server providers, they let you create servers with pre-installed software like Wordpress, and Dokku. Wait, Dokku? What’s that?

In the words of a friend:

That sounds fun! So I decided to get my old WebMines game running with Dokku, and all it took was one change to the code (I had host the server on the port specified by the _PORT _environment variable), two files

and Procfile (pointing to the name of the main file),

And done! My terrible, three year old long-polling-based Python-powered incomplete minesweepers game has a place on the internet, and when I want to update it, all I have to do is another git push. Be warned, it’s occasionally broken and doesn’t include a concept of points/success/failure. 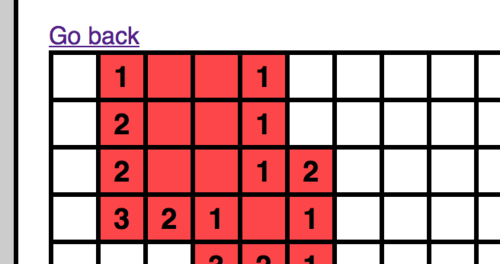 a fairly uninformative screenshot from the game

As for hosting static pages like Plotter and Automa, all I had to do was make sure the main page was called index.php, and dokku figured out it was a php application and set up an ngnix server for me. This makes me very happy because it means I get to continue my run of never having have to learn how to actually set up a web server properly.

P.S: Once I get a bunch of my things up and running, I’ll probably do a post about it. Or just make a page for them and post about the page. Or maybe a post about how much I’m annoyed that NodeJS’s API has changed so much in three years that I basically have to rewrite half of everything I made back then, but how it’s really my fault for not keeping track of which versions of which modules and nodejs runtimes I was using for which app. *grumble*