Note: the bulk of this post was written in November 2018 shortly after the incident occurred, but the post is dated 2019 because I’m slow at producing blog posts

For me, the phrase “pie dee over two squared aitch” (𝜋 (d½)² h) - also known as “pie are squared aitch” (𝜋r²h) - evokes images of university lectures; magnetic cylindrical rods, electric charge in a piece of wire. If you need to understand those things, you need to know how much space they take up in the world. Until the situation described here, I don’t think I’ve ever actually needed to calculate the volume of a cylinder outside of an exam.

Recently I found myself making a pretty large quantity of apple butter. I can’t say I’m apple butter’s greatest fan, but I’ve started cooking in bulk according to precise recipes and storing it all in glass jars at room temperature a.k.a. “canning”, and apple butter is a good introductory recipe.

The recipe looked simple enough, it’s basically apple sauce cooked for longer. The recipe asks you to boil 6 lbs of apples in 2 cups of apple cider for half an hour, blend it, then add 3 cups of sugar, some cinnamon and keep cooking for a few hours.

However, I hit a snag at the “blend it” stage. The recipe book suggested I transfer boiled apples to a blender for puréeing, then transfer them back to the pot. Such unnecessary effort! I’m pretty sure that immersion blenders had been invented by 2006 when this book was written.

I patted myself on the back as I transformed the contents of my pot of apples to mush and saved a significant quantity of cooking and washing labor. This was a figurative patting on the back. I recommend a two-handed grip for stick-blending large quantities of scalding hot apples.

Then I read on. The next step was “Measure 12 cups (3 L) of apple purée”, then the step after was to add the sugar, but if I had too much apple purée the ratio of sugar to purée might be off and so there might not be enough sugar to preserve the final product! I needed to be sure in that moment that I had the correct volume of apples. I resigned myself to having to wash a measuring jug after all

Then inspiration came to me. I ran to grab a tape measure. First I measured the height of the pot, starting from the top of the base. 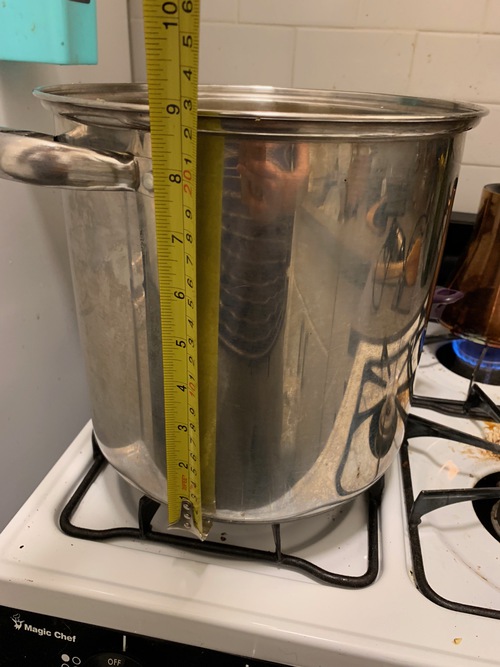 The height of the pot. 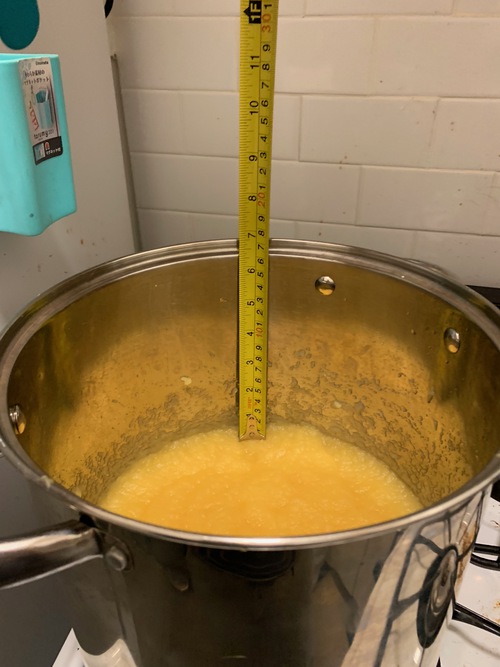 and finally I measured the diameter of the pot. 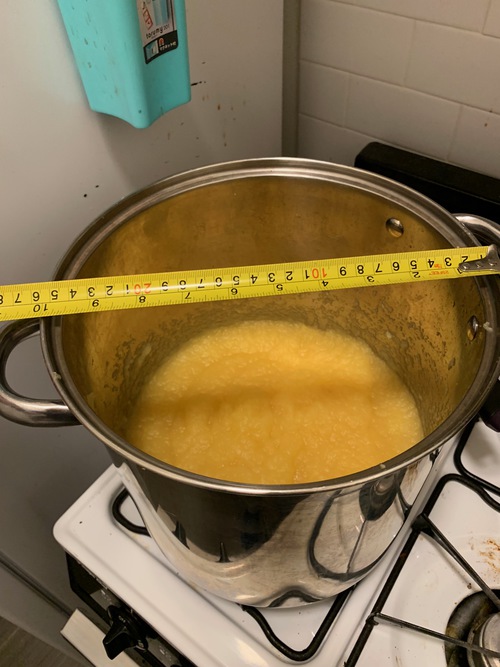 A batch of apple butter.

However, in retrospect I think I was being a bit cavalier with my measurements, rounding to the nearest 0.5 cm. If I were 0.25cm off the real measurements, how wrong could I be?

That doesn’t seem so bad, but there was another mistake I could have made: if the tape measure was not perfectly vertical then I may actually have measured the longest side of a triangle formed by the side of the pan, the 1.5cm metal tip of the tape measure, and the tape itself, which would have resulted in an overestimate.

In any case, later on I messed up by undercooking the apple butter by about 3 hours, noticing my mistake after canning about half of the mixture into four 8oz jars, then cooking the rest for longer and canning it in five more 8oz jars, bringing me to 9 jars instead of the recipe-suggested 8, so in the end it was hard to know how accurate I really was.

But hey, at least I had fun measuring things. If you actually managed to get this far: thanks for your time!