I guess you want more than that. OK, I’ll give you my very first impression: everything is made of grids. 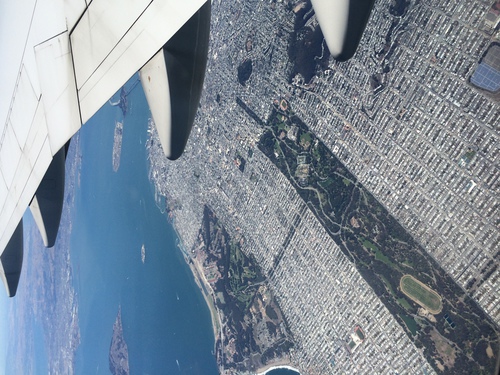 This is a fairly well known fact amongst us Brits. U.S. cities were founded when we knew how big cities would get, so they just laid everything out in grids. Want to give someone an exact location in a city? Just say “On <x street> & <y street>” and they’ll turn up at the intersection of x and y. Neat!

Another funny thing about grids is that I apparently say it like “grits”, which resulted in an Uber driver who was completely baffled that I would say “Everything is made of grits here!”. Why is that baffling? 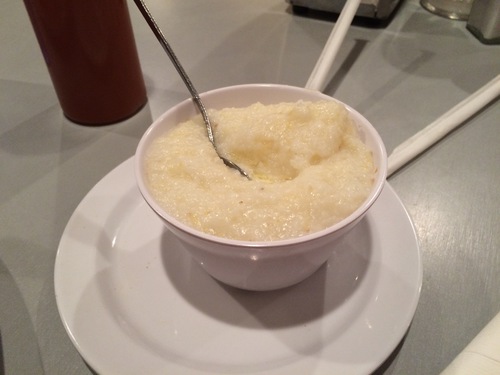 Because this is grits, “a food made by boiling ground maize (also known as corn), and usually served with other flavourings as a breakfast dish, usually savoury.” Basically corn porridge, except they don’t really have the word “porridge” here.

Going back to the bit where people misunderstand me, why does everything think I’m saying “Jeff” when I say “Joe”? It’s happened so much, I think I might rename myself to Jeff.

But anyway, things get weirder.  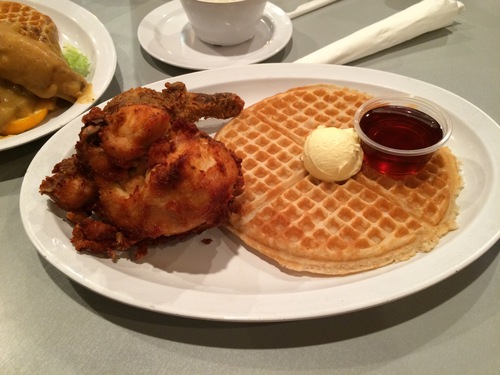 I have no words.

This, my English friends, is the Chicken and Waffles which the grits came with. Yes, chicken and waffles. Us British folks have a great appetite for American food culture; we have McDonalds and burgers and american style pizza. And there are some things we know that they have but we just reject, such as deep fried butter. And then there’s chicken and waffles.

But actually, as you’d expect, if you like waffles and also chicken, you’ll like chicken and waffles. Americans took two unrelated food items and slapped them together. Well done! I suppose I could do the same thing. Hmm. Chocolate… blueberry… bagels…   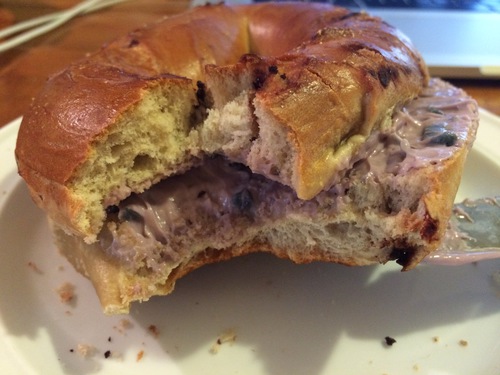 There is no one to blame for this abomination but me.

Chocolate chip bagel with blueberry cream-cheese? Nope OK I’ll leave the food invention to other people. Bagel places here are unsurprisingly Better Than Ours. The best ones have a large varieties of bagels, baked in store, a large selection of cream cheeses, and they let you combine them however you like. Honestly, Izzy’s Brooklyn Bagels</a> is probably the best place to get breakfast on University Avenue, and that’s not just my Jewish heritage talking. But when you go, you should get something more like this: 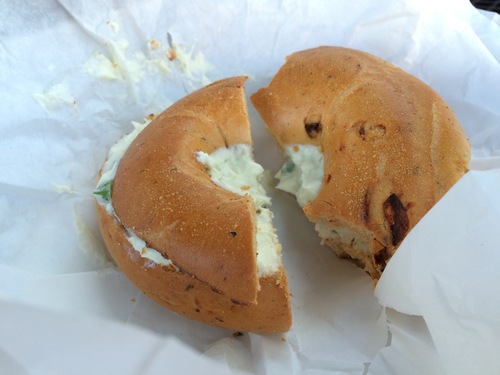 I think that was chive cream cheese and sun-dried tomato bagel, or something along those lines. Whatever you get, it’ll probably be better bang for your buck than this place:   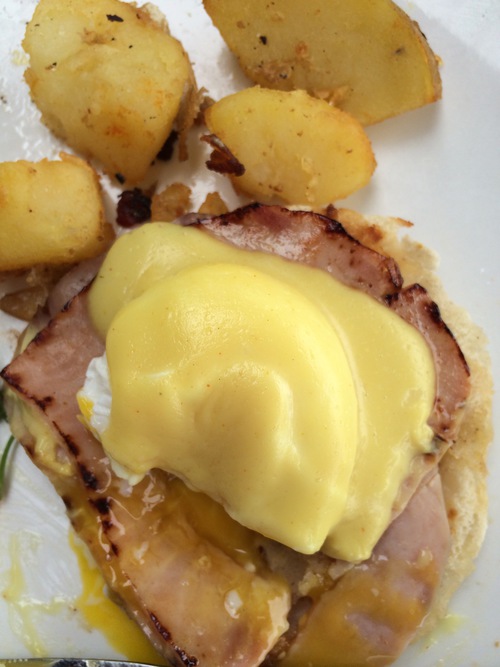 Why do they serve… boiled/roast potatoes(?) with Eggs Benedict? Anyway, this place on California Avenue made it clear that the U.S. is just as capable as us at doing slightly overpriced breakfast, except they add strange sides that don’t really fit.

On the topic of sides: you know the whole “America has huge portions” thing? Well, it’s often very true, specifically at sit-down restaurants. This was a relatively bourgey (rhymes with Bruges-eee) Mexican joint also on California Avenue: Palo Alto Del Sol, where I had my first ever shot of genuinely tasty Tequila. Apologies for the terrible quality, the iPhone 5S camera isn’t spectacular in low light. 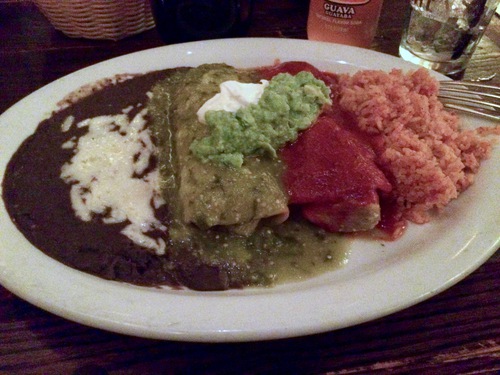 To give you an idea of the scale of this: they took a normal good-sized plate and then stretched it, and filled it with very dense beans, steak-filled wraps, and rice, and smothered it all in sauce and cheese. I’ve been thinking carefully about this, and I’ve come to the conclusion that finishing all of your food seems more optional in this country than in the UK. They give you too many chips, too much rice, too many potatoes. Sure you can finish it all if you’re hungry, but if you sit there trying to force it all down, people look at you funny. “Why are you trying to finish that? It’s just potatoes!”. Unbridled prosperity can have some interesting consequences.

Anyway, that’s the ‘upper-tier’ Mexican food which the British are mostly used to, but I’m in California, a place which the U.S. bought from Mexico. They have actual Mexican food here. So here’s a question: what is a taco? 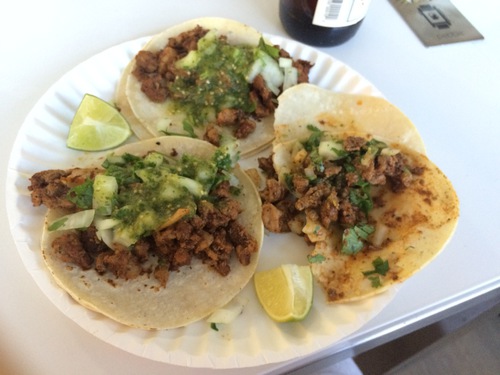 Flat things with stuff on them

Many things are tacos, but these are one of the most common kinds! I think I might once have seen tacos like this in the UK, but still they were at some upmarket place in London. But no, my friends, this is also tacos, a blob of meat spooned on top of floppy tortilla bread. You can get one of these babies for $1 from a taco truck - that’s $3-4 dollars for a full meal. Or you can pay three times as much if you want tacos that aren’t as good. Or in this case, you can go to a Hackathon where Pebble rents out a taco truck and gives everyone free tacos. Yay tech! So, what else is Mexican?  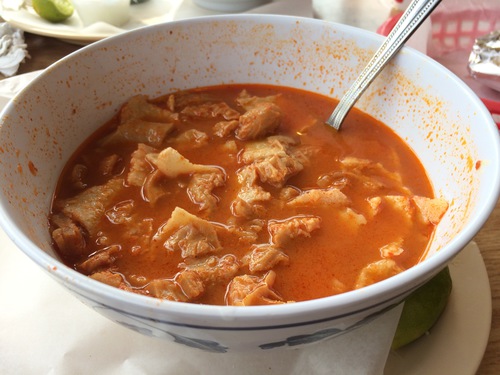 It feels odd to put stomach inside your stomach, but #yolo

This is Menudo, basically a bowl of beef stomach, which you would have for breakfast. I was directed by Katarina to rip a corn tortilla up into little pieces and drop them in to “thicken” the soup, which felt kind of exotically unfamiliar. As a whole, I feel like this is the kind of food which many English folk might turn their noses at, but I can tell you that it was delicious. Other tortilla related products: blue tortilla chips!   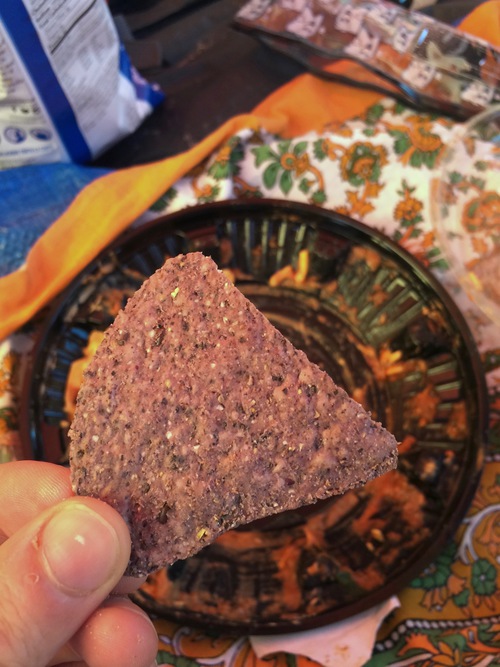 I try to always qualify "chips" with "tortilla", since if I don't I'll start referring to "crisps" as "chips". That way lies madness.

Yep, blue corn is a real thing, and an unfortunate victim of bad lighting.

In general, food from The Americas in general is more plentiful here. Here’s a messy photo from a mom-and-pop Salvadorian café we went to in San Francisco’s Mission District:

A jumble of half-eaten Stuff on a plate. A note on portion sizes: this was large enough for both of us.

This is papusa, a kind of soft tortilla filled with delicious things like cheese and beans and maybe pork too, served with rice and beans. It’s reminiscent of omelettes or pancakes, in that flat carby/proteiny way. In terms of price:satisfaction ratio, papusa is the best food I’ve had here. It’s fatty and salty and umami but not too oily, every component is delicious, each part complements the other perfectly, there’s nothing pretentious about it. It’s just good, simple food. And it’s from El Salvador, a country which seems to have zero restaurant representation in the United Kingdom. Don’t believe me? I googled “Salvadorian restaurant UK” and all I found was Salvadoran Armada, a “Spanish” restaurant, which has no papusa. A crying shame, if you ask me.

So you’ve seen one of the three food-specialisms in the bay area I’ve identified: food from south of the border. Another one is avocados. Subway has a “local special” with avocados in it. Pebble’s work catering regularly puts avocados in the salad. This is an avocado sandwich with turkey and bacon, the Nifty from the lovely Peninsula Creamery. 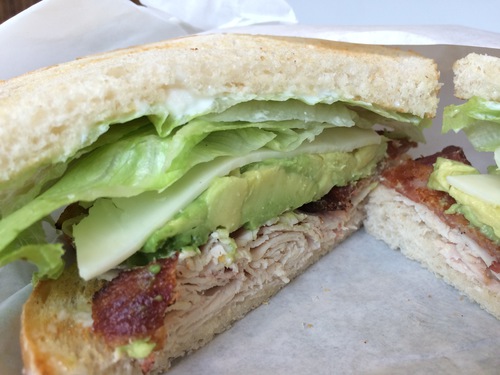 The second best thing on the menu, next to Jefe.

Besides its extensive and excellent selection of sandwiches and breakfast items, their menu exhibits something else which seems to be more prevalent in the bay area than elsewhere: a larger selection of cheeses. When you order a sandwich, you’ll then have to decide between one of five different kinds of cheese. 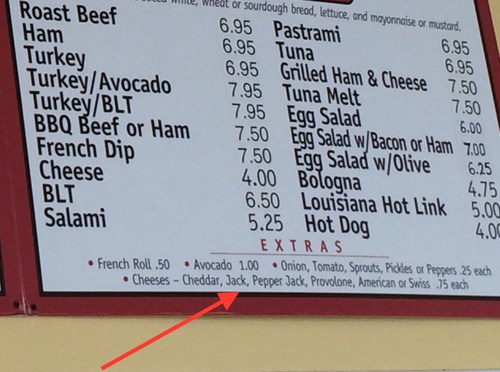 5 different kinds of cheese. Sometimes they make you pick your bread too. It's all too much for me. I just choose randomly these days. Also: "hot links" are sausages in buns.

This experience threw me off at first, since it’s quite unlike the UK where “cheese” basically means “cheddar” unless you qualify it with “cream”. The same place also sells a product called Orange Whip. My English friends, I am about to bring to you a new and amazing recipe that even you at home can make all by yourself. Here are the steps

That’s it. It is beautiful. It tastes like a fizzy orange sweet except that you’re drinking it. Today, however, it occurred to me that I could ask for Orange Whip with an ice-cream that’s not vanilla. Today, I invented the Raspberry Orange Whip. 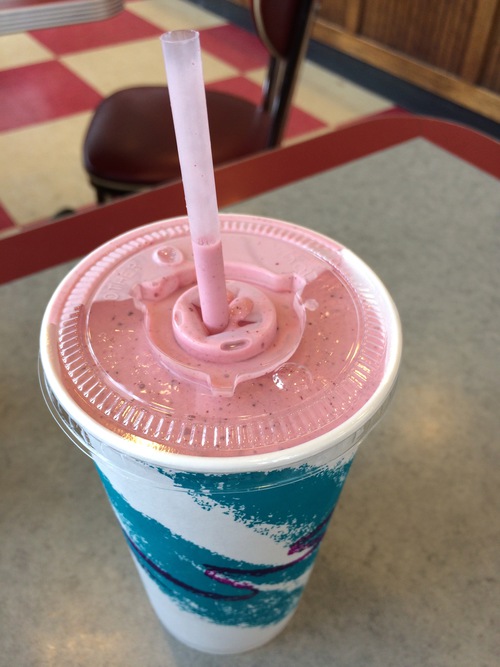 A new-hire was at the counter at the time and I think he wasn’t actually sure how to make it, so he asked his manager. She then called me up to the counter to let me know that “that’s not how we make it here. Are you sure that’s what you want? It might not be good, I just want you to understand that”. She pulled a friendly yet disgusted face which said “you’re not allowed to complain when this is inevitably terrible”. I’m happy to say that she was very wrong. The Raspberry Orange Whip is amazing.

The J1 visa that I’m on is technically a “cultural exchange” visa, with which I am supposed to bring part of the U.S. back home, and also contribute to the U.S. This is my contribution.

Another California Classic is clam chowder, since seafood in general is very popular. So far all I’ve had is a small cup of clam chowder in a fancy hipster bar in downtown Palo Alto (Local Union 271). It tasted like cream of mushroom soup with clams in it, which is good because I happen to like cream of mushroom soup. I will include this heavily adjusted photograph for the sake of completeness. 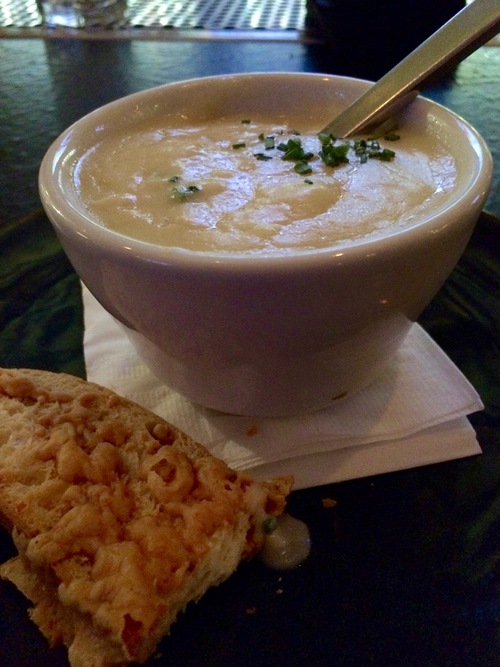 What is this, a clam chowder for ants? (in fact, the small portion was a welcome change)

I found out about this place from the bartender at the Gravity Wine Bar. I was told that America has excellent service, and I wasn’t sure what to expect. Well, one could dedicate a whole blog post to American service, but instead, here’s a single example.

When I idly asked the bartender “do you know any other good spots in the area?” he proceeded to dump his entire knowledge of bars, restaurants and nightlife in this and all neighbouring cities until I heavily hinted that I was very grateful and had more than enough. For service like this, I can give a 25% tip. 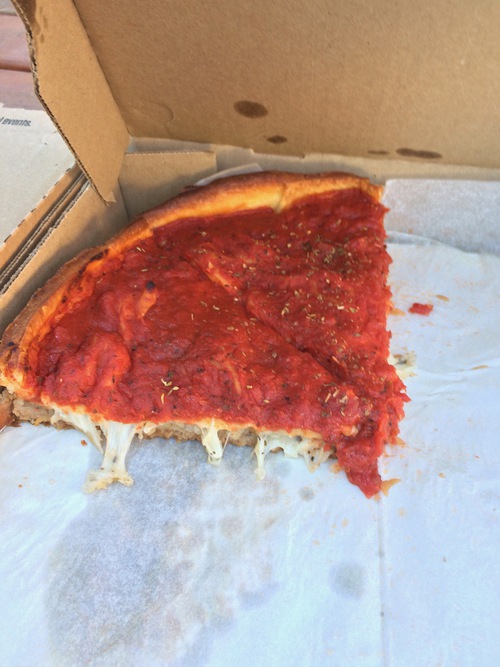 Did they just put stuff on in the wrong order by accident and call it a day?

Why is the tomato on top of the cheese and fillings? This is incorrect. This is not how you pizza. Sure, its delicious and allows you to include more cheese and lets you really taste the tomato sauce, but it’s wrong. And then, biscuits. 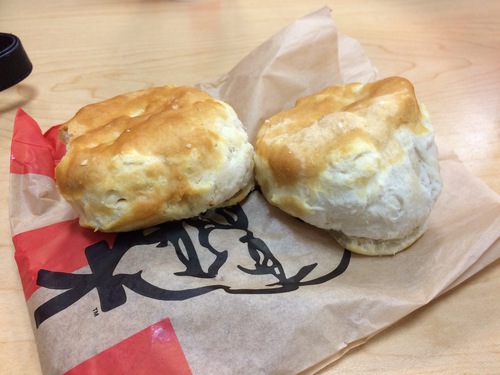 Anything which we call “cookies”, americans call “biscuits”. The word “biscuit” in America refers to this abomination. It’s a vaguely scone-like ball of bread, which doesn’t really need to exist. Apparently you eat it with gravy, but I declined to put myself through that ordeal out of sheer indignation.

So, surprise! You might have thought you were going to read a varied and interesting analysis of the differences between the Bay Area and the United Kingdom, but in fact I just tricked you into reading a food-blog post with practically every single self-indulgent food snap I’ve taken since landing. Luckily for you, I don’t intend to continue this way. Future planned topics include “socioeconomic observations: urban contrast” and “doorknobs”.